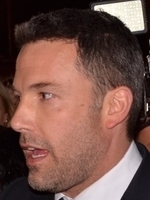 Ben Affleck knows you hate his back tattoo, and he doesn’t really care. The 46-year-old opened up about the ink—a full-color depiction of a phoenix taking flight—that covers his entire back during Thursday’s episode of The Ellen DeGeneres Show.

Plenty of ink was spilled writing about his tattoo last March, when photos of him at a beach filming Triple Frontier surfaced. Affleck acknowledged that the feedback was “not so much positive.”

Affleck tells DeGeneres: “It’s not something that I sort of kept private, It wasn’t like I was doing photoshoots or whatever, we were two hours north of the city on an island in Hawaii and we didn’t know the paparazzi were there. So they got a picture of my tattoo. And sentiment ran … you know, against.”

Affleck stood by the ink, saying: “It’s meaningful to me, I like it,” he said. “I love my tattoo. I’m very happy with it. Luckily, I’m the one who has it.”

Two of his exes, Jennifer Garner and Jennifer Lopez, have slammed the tattoo.

“It’s awful! What are you doing?” Lopez said during the “Plead the Fifth” segment on Watch What Happens Live with Andy Cohen. Garner told Vanity Fair: “You know what we would say in my hometown about that? ‘Bless his heart.’”

Khloe Kardashian Opens Up About Body Image Struggles, Celebs Respond
Are Matt James and Rachael Kirkconnell Back Together?
Keke Palmer Opens Up About Being A Child Star
Marlo Hampton Opens Up About Her Friendship With Porsha Williams
Tyler Perry Sets Up Vax Site
Tyrese Gibson Ripped on Social Media for Talking About Mom’s Drinking Habits