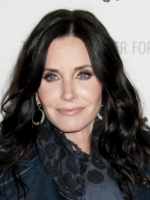 COURTENEY COX RETURNS TO HER FRIENDS APARTMENT: Nice digs! Courteney Cox visited her old Friends apartment, and shared her findings on Instagram. The apartment, located on Bedford and Grove street in NYC’s luxe West Village, is out of her price range, she jokes. “Goodnight guys, I'm going home,” the 54-year-old actress says in her Instagram video, heading towards the apartment. She captioned the post, “The One Where My Rent Went Up $12,000. #friends #mollymcnearney #missthosedays.” What TV home or apartments do you most wish you could inhabit?

ALEC BALDWIN NOT SURE ABOUT ANOTHER BABY: Alec Baldwin tells People that he isn’t sure he’s ready to have another child. The 60-year-old shares four kids with his 35-year-old wife, Hilaria, the youngest being 10 months. He also shared Ireland, 23, with Kim Basinger. While Hilaria is up for another, Baldwin deadpans: “When my kids graduate school, I’ll be 85.”

HILARY DUFF’S HOME TARGETED? Hilary Duff’s Beverly Hills home was targeted by an intruder, TMZ reports. She and Matthew Koma, with whom she shares a baby girl, were at home when they noticed a strange man in the backyard. They scared him away and called the police, who discovered a window screen was missing from their home. Police are still investigating.

CAMILLA ENJOYS A WEE SHOT OF RUM: Bottoms up, Duchess! Camilla, Duchess of Cornwall, was spotted taking a shot of local passionate fruit rum during her royal tour of the Caribbean with her husband Prince Charles. “Blimey, that packs a punch!” she reportedly said after she downed the shot in Kingstown, the capital of Saint Vincent and the Grenadines.

WENDY WILLIAMS’ HUSBAND RELEASES A STATEMENT ON THE STATUS OF THEIR FAMILY: Wendy Williams recently revealed that she has been living in a sober house, battling an addiction. According to The Jasmine Brand, Williams’ husband, Kevin Hunter, has released a statement regarding Wendy and the status of their family. He told Entertainment Tonight, “Wendy is doing well. We’re doing well as a family. We are moving forward with working on her sobriety and doing the work to help others, not just ourselves. It is a family process. Anybody that has to deal with this knows this a family process… and we are dealing with it and moving forward.”