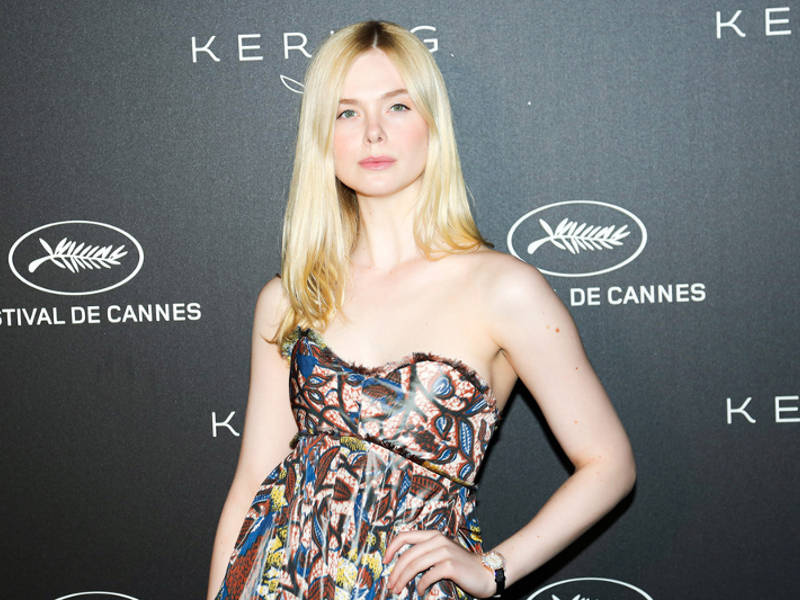 ELLE FANNING SHARES PICS OF ECZEMA FLARE-UP: Elle Fanning is sharing a look at her eczema flare-up in filter-free selfies on social media showing her rosy eyelids. She captioned it: "Eczema but make it eye shadow.” The Marvelous Mrs. Maisel star Rachel Brosnahan related and commented, "I feel seen."

CHRIS EVANS ON PENIS PIC: Captain America’s Chris Evans appeared on The Tamron Hall Show Tuesday and addressed the leaked penis pics that went viral over the weekend. “Something happened this weekend?” Evans first joked. “It was an interesting weekend full of lessons learned, a lot of teachable moments,” Evans said. “It’s embarrassing, but you gotta roll with the punches. I have fantastic fans who came to my support.” He previously took to Twitter, joking: “Now that I have your attention 🤦🏻‍♂️🤷🏻‍♂️…. VOTE Nov 3rd!!!”

CYP PAUL RUDD WANTS YOU TO MASK UP: Paul Rudd is teaming up with New York Governor Andrew Cuomo to get millennials to wear masks. "Paul Rudd here, actor and certified young person," the Marvel star, dressed in sweatpants and a New York baseball cap, said in the video message posted to Cuomo's social media pages. "A few days ago I was talking on the iPhone with my homie, Gov. Cuomo, and he's just going off about how us millennials need to wear masks because, get this, apparently a lot of COVID is transmitted by us millennials. No cap." The 51-year-old continued: "So Cuomes asks me, he's like, 'Paul, you've got to help. What are you, like, 26?’ And I didn't correct him. So, fam, let's real-talk. Masks, they're totally beast. So, slide that into your DMs and Twitch it."

JUDE LAW WELCOMES SIXTH CHILD: Jude Law has welcomed his first child with wife, and his sixth overall. He told Jimmy Fallon on Monday’s The Tonight Show: "It's really wonderful. We feel pretty blessed that we were in a time where we could, as a family, just nest and enjoy each other's company and every day as it came." Law and Phillipa Coan got married in April of last year.

AMANDA KLOOTS ON SCATTERING NICK CORDERO’S ASHES: In a Q&A with fans, Amanda Kloots reveals that she has scattered some of her late husband Nick Cordero’s ashes in the Pacific Ocean. Cordero died of COVID complications in July. "I put some of them in the Pacific Ocean on our anniversary because his dad's were also put in the Pacific," Kloots said in response to one fan's question, before revealing another thing she hopes to do with her late husband's remains. "Looking for suggestions for necklaces to be made with some of his ashes," she wrote. "I've heard this can be done and haven't had time to research it yet."

'CHEER' STAR JERRY HARRIS DENIES ALLEGATIONS OF SOLICITING SEX FROM MINORS: Jerry Harris, star of the Emmy-nominated Netflix hit "Cheer" has denied allegations that he has been soliciting sex from minors. According to US Weekly, the 21-year-old spoke out via his spokesperson, saying, "We categorically dispute the claims made against Jerry Harris, which are alleged to have occurred when he was a teenager. We are confident that when the investigation is completed the true facts will be revealed.” 14-year-old twin brothers cheerleaders have claimed that Harris harrassed them online and in person at cheer competitions when they were only 13. At the time of the allegations, Harris would have been 19.