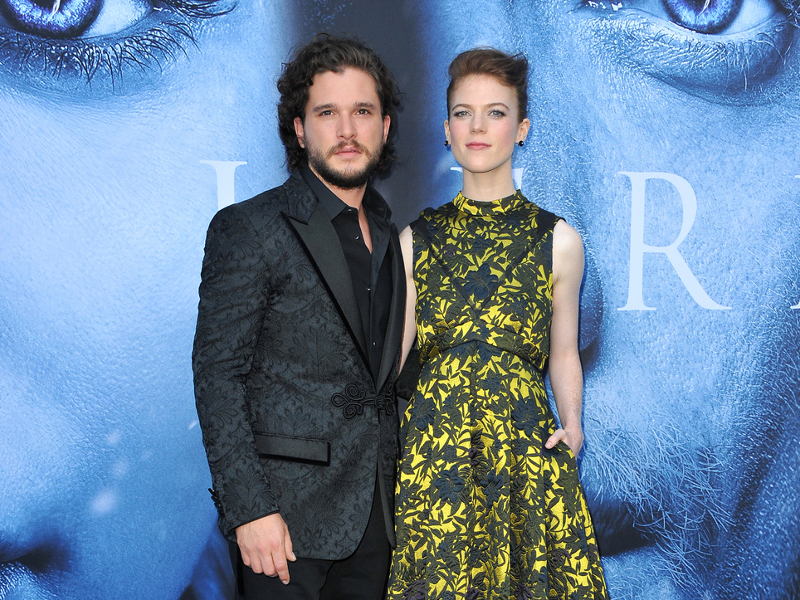 JON SNOW PREPARES FOR BATTLE: In a new round of Game of Thrones shots released by HBO, the whole gang—including Jon Snow (Kit Harington), Arya Stark (Maisie Williams), Jorah Mormont (Iain Glen) and Daenerys Targaryen (Emilia Clarke), appear to be plotting some sort of attack. Meanwhile, Liam Cunningham fessed up to stealing clothes from the GOT set. “I went off with a U-Haul truck full of stuff,” Cunningham admitted. “Dothraki swords, lumps of obsidian, Bank of Braavos money.” Williams, Sophie Turner and others also filched items.

ALEX TREBEK GIVES HEALTH UPDATE: Jeopardy! host Alex Trebek, who was diagnosed with stage 4 pancreatic cancer, gave a health updated on the last day of taping the current season of the show.  “Some of you may recall that at the beginning of this season, I promised you that we had some surprises for you,” he said in a video message posted Wednesday. “Well, of course, I had no idea at that time that there were some surprises in store for me as well. So here, on the last day of taping for our 35th anniversary season, I wanted once again to thank you for your continuing messages of encouragement and support, particularly the many cards I’ve received from young people. I’m touched beyond words.” He continued, “I’ve always tried to be straight with you and I’m not going to stop now, so despite what you may have heard, I’m feeling good, I’m continuing with my therapy and we, by we, the staff, is already working on our next season, the 36th year of ‘Jeopardy!'”

CHRISSY TEIGEN DRAGS TROLL FOR CALLING HER CHUBBY: Nope! Mother of two Chrissy Teigen lashed out on a troll who tweeted at her that “Chubby needs to get to the gym.”Teigen replied, "I hate to say this but…you are not a small person?" The troll was commenting on a photo of her, her husband John Legend and House Speaker Nancy Pelosi. The model and cookbook author has been open about her weight gain since welcoming Luna, 3, and Miles, 11 months. "Basically I am 20 pounds heavier than I was before Miles," she revealed. "I never lost the last bit because I just love food too much. Just coming to terms with my new normal, when I had this certain number for so long!"

KARDASHIANS HELP OPEN UCLA CENTER NAMED AFTER FATHER: Nearly 16 years after Rob Kardashian’s death, Kim, Khloe, Kendall, Kylie and Kris Jenner celebrated the opening of UCLA’s Robert G. Kardashian Center for Esophageal Health in Los Angeles. “So proud to announce the Robert G Kardashian center for esophageal health being launched at UCLA,” Kim wrote on Twitter. “My wish is that other families can have more information and we can also focus on health and prevention.” In a video shared to Twitter, Kim further explained the center, sharing, “My whole dad’s side of the family came to support.” He died in 2003 at the age of 59 of cancer.

WENDY WILLIAMS IS IN DEMAND: Kevin who? Just days after filing from divorce from her husband of 22 years (Kevin Hunter), Wendy Williams tells viewers that she is getting asked out. “The invitations for social events keep pouring into my phone and stuff. They really do,” the Wendy Williams Show host, 54, said on the Wednesday, April 17, episode. “I was minding my own business last night, reading my book — you know, I love to read — and all of a sudden my cellphone rings.” Requests for dates have come in from DJ Boof, who works on her show and Charlamagne Tha God.

ED NORTON SUES LANDLORD OVER FATAL FIRE: Ed Norton is saying that his film crew wasn’t at fault in a fire that broke out and killed an NYFD officer last year. The Blast has obtained court docs stating that his production company, Class 5, is suing Vincent Sollazzo, the building site’s owner. Motherless Brooklyn was shooting last March when a fire unexpectedly broke out; they blame him for failing to maintain the building’s boiler, sparkler system or smoke detectors. Motherless Brooklyn stars Bruce Willis, Willem Dafoe, Bobby Cannavale and Alec Baldwin. Norton and Class 5 have been combating lawsuits themselves over the fire, but they maintain their innocence.