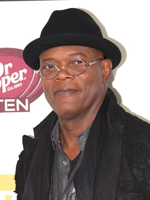 MORE ON MAMA JUNE ARREST: Mama June was arrested on Wednesday with her boyfriend Geno Doak when someone reported a domestic incident. TMZ reports that police busted her for felony possession of a controlled substance and drug paraphernalia. He as arrested for possession and domestic violence. Cops tell TMZ that the arrest is quite serious, as the substance she was caught with was crack cocaine and the paraphernalia was a needle and pipe.

SAMUEL JACKSON DOESN’T CARE IF COMMENTS ANNOY TRUMP FANS: Take him or leave him, Samuel Jackson seems to be saying. The Academy Award nominated actor let his disdain for President Trump be known in a recent sit-down with Esquire. He also spoke out about Trump supporters who might boycott his movies, saying: “I know how many motherf–kers hate me. ‘I’m never going to see a Sam Jackson movie again.’ F–k I care? If you never went to another movie I did in my life, I’m not going to lose any money. I already cashed that check. F–k you. Burn up my videotapes. I don’t give a f–k.”

DREAM THROWS ROB KARDASHIAN A B-DAY PARTY: Happy birthday! Rob Kardashian shares his birthday with St. Patrick’s Day, and his daughter Dream threw him a special party beforehand (she is spending the actual day with her mother, Blac Chyna). His sister documented the party on Instagram, writing:”Dreamy Dream wanted to throw her daddy a special birthday party before she goes to see her mommy. Her daddy's birthday is on Sunday (St Patty's Day) but she got her cousins together to celebrate!”

DISNEY ALUM KYLE MASSEY SUED FOR SENDING EXPLICIT MESSAGES TO GIRL: Kyle Massey is sued by a 13-year-old girl who says the Disney Channel alum sent her sexually explicit messages, according to multiple reports. The 27-year-old That’s So Raven alum allegedly sent her texts, images and videos, TMZ was first to report.