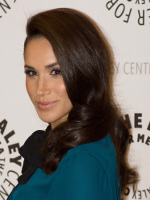 MEGHAN MARKLE AND PRINCE HARRY PAY TRIBUTE TO SHOOTING VICTIMS: Prince Harry and Meghan Markle continue to support those who have been affected by the shootings at New Zealand mosques. On Tuesday, they appeared at the New Zealand House in London, where they signed a book of condolences, and left bouquets in the victims’ honor. “Our deepest condolences… We are with you,” the couple wrote before signing their names near the Maori word “arohanui” meaning much love.

KRISTOFF ST. JOHN’S CAUSE OF DEATH REVEALED: Soap legend Kristoff St. John died due to heart disease and an accidental alcohol overdose, People reports. The two-time Emmy winner was found dead on February 3rd. He is survived by his fiancée Kseniya Mikhaleva, his daughter Paris and his daughter Lola. He was predeceased by his son Julian, whom he was buried beside.

FX, NETFLIX SUED OVER ACS: An anonymous person is suing FX, Netflix and the author of the book that The Assassination of Gianni Versace: American Crime Story is based on, claiming the show defamed them, The Blast reports.

PATRICIA ARQUETTE READY TO FIND HERSELF AGAIN: The 50-year-old Patricia Arquette jokes that she is ready to find herself after playing Dee Dee Blanchard, a woman with Munchausen syndrome by proxy, in Hulu’s real-crime series, The Act. Dee Dee’s teenage daughter, Gypsy Rose (Joey King), helped murder Dee Dee, with her boyfriend’s help. “You don't usually get that interesting of a part as a woman, that complicated. So I think that's part of it,” the actress tells ET of why she jumped so quickly into another “crazy woman” role after Dannemora. Arquette is quick to note she can be a bit of a “crazy woman” too. “If you saw my packrat piles, you would question my scruples,” she says, laughing at the thought.

KATE MIDDLETON MAKES FIRST SOLO APPEARANCE WITH THE QUEEN: Despite having been a member of the royal family since 2011, Kate Middleton had never had a solo appearance with Queen Elizabeth until Tuesday. (Her sister-in-law Meghan Markle, meanwhile, has gone on a solo appearance with the Queen a few weeks after her wedding to Prince Harry.) Kate and the monarch, 92, toured a high-tech university in central London.