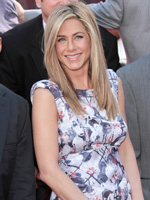 NIKKI BELLA IS DONE WITH WRESTLING: Total Bellas’ Nikki Bella is leaving the ring, news she shared on the show shortly after her twin Brie announced her retirement. “I just feel like I’m too old for that travel,” Nikki, 35, explained during the season 4 finale of the E! reality show on Sunday, March 24. “That travel was really, really rough. So I realized, I was like, ‘Why am I doing this anymore?’ I don’t feel good and I can’t — I mean, the girls are doing amazing things over there. I really am ready to hang up the jersey. Like, I can say it fully, I’m done.” During the show’s season finale, she also shared the news that she is dating Dancing With the Stars pro Artem Chivintsev. She and fiancé John Cena split in April of 2018.

JENNIFER ANISTON AND REESE WITHERSPOON INTRODUCE NEW SHOW: Jennifer Aniston and Reese Witherspoon took to the stage at Apple’s event in Cupertino, California Monday, where they dished on their new show, The Morning Show. Witherspoon said: “We pull back the curtain on the power dynamics between men and women in the high stakes world of morning news shows. It's seen through the eyes of two ambitious female characters.” Aniston added: “All of this and the chance for us to collaborate again has brought me back to television, and I'm really excited about it. So, we can't wait to show all of you what we have been cooking up.”

BETHENNY FRANKEL TEARFULLY DISCUSSES EX’S TAUNTS: In court on Monday, Real Housewives of New York star Bethenny Frankel recalled how her ex Jason Hoppy “used FaceTime to taunt me,” twice a day, every day. The estranged pair or duking it out over custody of their daughter Bryn, 8. “The circumstances were I was trying to FaceTime Bryn … and I have experienced basically every day Jason using it as a tool to harass me or abuse me or taunt me and on that day, I recorded our correspondence,” Frankel said, Page Six reports.

KIM KARDASHIAN GIVES NAOMI CAMPBELL A SHOUT-OUT: Fans have been speculating that Kim Kardashian is using Naomi Campbell as her fashion muse, donning a 90s Versace dress that looked identical to the one the model wore in a runway show, and also sharing shots of herself in a leopard-print catsuit by Azzedine Alaia that Campbell also wore in a 1992 show. Kardashian acknowledged it on Instagram, captioning a shot of herself in a colorful dress, “Naomi Forever.”

AMBER HEARD AND ANDY MUSCHIETTI GETTING SERIOUS? Amber Heard, 32, has been spotted out a lot recently (most recently, Sunday) with Andy Muschietti, 45, an Argentinian director who helmed It. Muschietti is directing the sequel to It, titled It: Chapter Two, which will star James McAvoy, Jessica Chastain, Bill Hader and Bill Skarsgård.