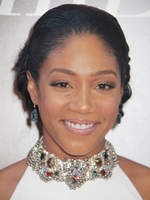 TIFFANY HADDISH RETURNS TO NETFLIX: Tiffany Haddish is coming back to Netflix, and she’s bringing her friends. The mega-streamer has announced that it is debuting a six-part series produced by Haddish, Wanda Sykes, and Page Hurwitz called Tiffany Haddish Presents: They Ready. Haddish will introduce six comedians who will perform: Chaunté Wayans, April Macie, Tracey Ashley, Aida Rodriguez, Flame Monroe, and Marlo Williams.

BEN AFFLECK COACHING LITTLE LEAGUE: Ben Affleck is coaching his 7-year-old son Samuel’s Little League team, with the goal of helping the kids with their batting and fielding skills. He was photographed at a game in jeans and a T-shirt, pitching and catching with the kids.

CAMERON DIAZ HAS FOUND HER HAPPY PLACE: Cameron Diaz is happy with her life outside of the spotlight with husband Benji Madden. The pair married in 2015, and the 46-year-old star largely stays out of the Hollywood limelight now, by choice. A source tells People: “Cameron feels so much better about everything since she married Benji. She had many years of dating high profile hunks. She found a different kind of man in Benji. He is her equal and respects her.” Previously, Diaz dated Matt Dillon, Jared Leto, Justin Timberlake and Alex Rodriguez.

BELLA THORNE BREAKS DOWN DURING READING: The 21-year-old Bella Thorne read from her book, “The Life of a Wannabe Mogul,” at the Weill Recital Hall at Carnegie Hall on Monday. The book discusses her love life, self-image and relationship with her late father; while reciting a poem about losing her father in 2007, she was overcome. “I just want to say that my dad might be dead, but I believe in something, and I believe he would be proud of me,” she said.

ROB KARDASHIAN NO LONGER HAS TO PAY BLAC CHYNA CHILD SUPPORT: TMZ reports that the custody battle between Rob Kardashian and Blac Chyna is now over. The site reports that the expenses for their daughter, Dream, will be split 50/50. Rob originally had to pay $20,000 monthly. Each parent will only pay for Dream’s needs when she is with them. Medical and school expenses will be split down the middle. It has also been reported that Rob will have more time with Dream than Chyna.