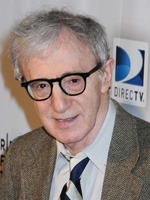 WOODY ALLEN HAS SET NEW FILM IN SPAIN: Despite being involved in a multi-million-dollar breach of contract lawsuit against Amazon, and being considered persona non grata by many in Hollywood, Woody Allen has his next project set for Spain. Amazon severed its relationship with Allen after old sexual assault allegations against his adopted daughter Dylan Farrow resurfaced. Allen will work with Mediapro, producer of Allen’s previous hits Vicky Cristina Barcelona, as well as Midnight in Paris and You Will Meet a Tall Dark Stranger. Shooting will begin in Spain. In a statement to The Hollywood Reporter, Mediapro said: "We have a 10-year relationship with Mr. Allen and, like all projects we produce, we judge the creator by its work. All of our projects have a unique personality, and we support all types of artistic voices and ideas and remain committed to producing well-defined and creative projects for audiences worldwide."

BRODY STEVENS DIES BY SUICIDE: Comedian Brody Stevens, 48, has died by suicide, according to multiple reports. He was found hanging in his home at 1 p.m. on Friday. He was a regular figure on the stand-up circuit and appeared in The Hangover, Due Date and The Hangover Part II. When news of his death broke, comedians including Patton Oswalt and Nick Kroll, shared their grief on Twitter.

NORTH WEST LANDS FIRST MAGAZINE COVER: North West, 5, is covering Women’s Wear Daily’s Beauty Inc. for its latest. This is Kim Kardashian’s daughter’s first solo cover, though she did land on Vogue as a 10-month-old along with her famous mom and dad Kanye West. She has also covered Interview with Kim and posed for Harper’s Bazaar with Kanye and her brother Saint West. “Her distinct fashion sense belies her age, and lately, so does her eye for makeup,” editor Alexa Tietjen wrote.

JOHN KRASINSKI CONFIRMS RELEASE OF A QUIET PLACE: Look for the sequel to John Krasinksi’s directorial debut A Quiet Place on May 15, 2020. Krasinski wrote to his social media followers, "…time to go back. #PartII 5-15-20." He has not yet said if his wife Emily Blunt, who starred with him in the original, will be a part of the sequel.