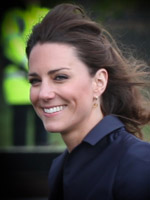 KATE MIDDLETON GETS BACK TO SCOUTING ROOTS: Kate Middleton visited the Scouts’ HQ on the outskirts of London Thursday, and while she was there, the mother of three climbed into a den built against a tree with a little girl. “It’s very waterproof in here,” the 37-year-old royal said as she hunched down. “Wouldn’t be a visit to Gilwell Park without a bit of den building,” the Scouts captioned the image on Twitter, adding the hashtag #SkillsForLife. Kate was a Brownie herself as a girl, so she should know.

KATIE HOLMES AND JAMIE FOXX SPOTTED OUT AND ABOUT: Katie Holmes and Jamie Foxx were spotted out on a romantic walk in Central Park, People reports. While they were first linked in 2013, they have chosen to keep their romance out of the spotlight.

KATE BECKINSALE IS BACK ON INSTAGRAM: After purging her account amid criticisms of her new romance with Pete Davidson, Kate Beckinsale has rejoined Instagram. Her first post featured herself standing in front a plant. She captioned it: “Back to business . Also this is not a plant it is a painfully attached tail.”

COLTON HAYNES TALKS SOBRIETY: Colton Haynes, 30, is opening up about his newfound sobriety. “In 10 years, there were maybe 25 days I didn’t drink,” Haynes told Attitude Magazine. “I remember when I started, it was a couple glasses of wine, and it regressed into really dark times.” When he came out as gay in 2016, he said it spiraled out of control; then his mother died, and he announced his divorce from husband Jeff Leatham. “I got married and that didn’t work out. That was extremely public and heart-breaking, and right when that was going on, my mom died,” he said. “At that point, I fell apart. My brain broke. I was doing a massive comedy for a studio, showed up to work and got fired on the first day. They said I looked as if I had ‘dead in my eyes’, and I did.” He said he hit rock-bottom after a seven-day bender, and now that he has recovered, he said he is ready to speak out and end the “stigma” of addiction.

ANDREA NEVADO ON JANE THE VIRGIN’S LEGACY: Andrea Navedo, 41, recently discussed how she believes Jane the Virgin has had an impact on the culture at large. Navedo tells ET that she thinks her character has helped dismantle Latina stereotypes: “I'm really proud of the journey that Xo has had over the five seasons. And I'm really proud of Jennie Urman and all the writers who have decided to take on a female character who can easily be made stereotypical and make her have a lot of layers, a lot of depth and make her human. She's not just a one-note, sexy, beautiful Latina woman who… that's all she does. She's so much more than that.” She continued: “She's a mom. She's always been a dedicated, hardworking mom. She's an aspiring artist. She's always had to deal with some real-life situations like having an illness. I love that fact that they have taken that on.”