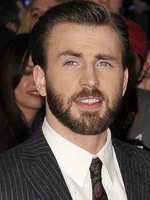 Chris Evans has spilled the tea. The 37-year-old Captain American star covers The Hollywood Reporter’s latest, and inside, he opens about a whole lotta stuff.

Why has he been a bachelor for so long? Evans said: “I’m the one who fears being enveloped. I was always a really autonomous guy my whole life. Camping by myself is one of my favorite things. I really like to be with someone who also has their own thing to do as well, you know? If I’m with someone who just kind of adopts my life, that can feel a bit suffocating.”

Will he be hanging up his cape after the release of Avengers: Endgame?

“Momentum is a real fallacy, in my opinion,” he said. “But it has a really strong hold on a lot of actors’ mentalities. You really believe that while the ball’s rolling, you gotta keep it rolling. I could be wrong, but to me — I just don’t believe in that. I don’t think that’s real.”

Evans stumped for Hillary Clinton in 2016. Any regrets? “You don't want to alienate half your audience,” says Evans. “But I'd be disappointed in myself if I didn't speak up. Especially for fear of some monetary repercussion or career damage — that just feels really gross to me.”

He’s cut back, he explain.

“You know, I've chilled out on weed,” Evans says. “I used to love it, but now I think it's the one thing that gets in my way. It zaps your motivation. I think apathy kind of bleeds in, and you start to think, 'Well, I'm not apathetic, I just don't feel like doing that.' And it's like, no — you would feel like doing that if you weren't stoned. And, you know — I'm 37. I can't be smoking weed all the time. That's crazy.”