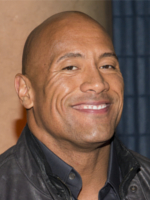 Dwayne “The Rock” Johnson is celebrated the world over for his strength. So it’s not a shock that the 1stArmored Division at Fort Bliss decided to name a tank after him.

They announced the move in a tweet: “'If you smell what America's Tank Division is cooking!' Shoutout to the #IronSoldiers assigned to the @Blackhawk_SQDN for naming one of their tanks in homage to the @TheRock. Hopefully the 'People's Champ' will see it and give you guys a shoutout and a retweet! #TuesdayThoughts”.

On Friday, he gave them a shout-out on Instagram, writing: “I’m sending a salute of respect & gratitude to the Blackhawk Squadron 1st Armored Division for the honor of naming their tank (the most advanced in the world) Dwayne 'The Rock' Johnson. Heavy duty, bad a–, sexy AF and built to take care of business 😉 — but most importantly, thank you all for your service. Grateful to the bone.”

As of Monday, the image received 2 million+ likes and thousands of comments. Much support, but also some serious criticism from fans.

“Well I really like you as a person and everything but what is a tank meant for? If it is to take the lives of human beings and others then it is not admirable… I hope it won’t be used… May God bless you all ❤️ Peace and Love,” one Instagram user replied.

“That’s not something to be very proud of because it’ll be your name on that tank that’ll kill innocent people,” another claimed.

D.A. Weighs in on Charges Against Alec Baldwin, Wife Hilaria Defends Him
Why George Clooney Turned Down $35M for Day of Work
Dakota Johnson Gave Olivia Colman Her First Tattoo
Michael J. Fox Doesn’t Think There Will Be A Cure For Parkinsons In His Lifetime
Trey Songz Investigated For Sexual Assault
Matthew McConaughey Will Not Run For Governor Of Texas