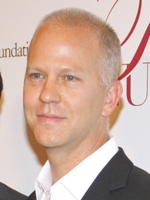 LUKE WILSON JOINS ZOMBIELAND: Luke Wilson is set to join the Zombieland sequel, Variety reports. Wilson will star alongside Woody Harrelson, Jesse Eisenberg, Emma Stone and Abigail Breslin. The film will follow the story of the zombie slayers, who must face off against new kinds of undead. The original’s filmmaker Ruben Fleischer has joined the sequel.

RYAN MURPHY SETS FIRST NETFLIX ORIGINAL: Ryan Murphy is getting going with his first original on Netflix. He is co-creating the show, described as a “love letter to the Golden Age of Tinseltown,” with his longtime partner Ian Brennan (Glee, Scream Queens). Production begins this summer.

NETFLIX TO ADAPT KRISTIN HANNAH’S FIREFLY LANE: Netflix has ordered Firefly Lane straight to series. The show will be based on the novel of the same name by bestselling author Kristin Hannah. The story follows Kate and Tully, two women who met as young girls and became best friends through 30 years of ups and downs. Hannah’s The Nightingale and The Great Alone were previously optioned at TriStar and are currently in production.

UMBRELLA ACADEMY REINS OVER FAN WEDDING: When mega-streamer Netflix discovered that two Umbrella Academy fans were getting married in New York City on Feb. 15th, the streamer decided to help them celebrate. Netflix provided a 60-foot umbrella as canopy, then threw a mini-parade through Times Square with a live performance by the Academy’s Klaus Hargreeves (aka Robert Sheehan).