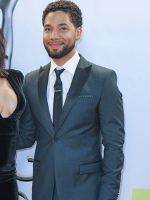 PRPhotos.com
Posted on February 22, 2019 by Pulse of Radio

Empire star Jussie Smollett appeared in court Thursday after surrendering to police early in the morning. He faces one felony count of disorderly conduct for allegedly filing a false police report.

His bond was set at $100,000. Smollett was also ordered to surrender his passport. He is due back in court on March 14th. Prosecutors say that he was disappointed by Fox’s reaction to the “racist and homophobic” letter that was sent to the Empire set and addressed to him. (He allegedly sent the letter or arranged to have it sent).

The letter contained written threats, cutout letters and a powdery substance later found to be Ibuprofin. Part of the letter reportedly said, “Smollett, jussie, you will die” and “MAGA” was written as the return address.

Smollett then staged an attack, according to prosecutors. He paid two brothers $3,500 to fake an attack on him. He allegedly texted (one of the brothers) Abimbola Osundairo, “Might need your help on the low. You around to meet up to talk face-to-face?”

At a press conference after the hearing, Chicago Police Superintendent Eddie Johnson said Smollett was motivated to write the letter and stage the attack because he was “dissatisfied with his salary.” (Some reports peg the salary at $65K per episode).

Johnson said: “I am left hanging my head and asking, 'Why? Why would anyone, especially an African-American man, use the symbolism of a noose to make false accusations?

Johnson continued: “How could someone look at the hatred and suffering associated with that symbol and see an opportunity to manipulate that symbol to further his own public profile? How can an individual who has been embraced by the city of Chicago turn around and slap everyone in this city in the face by making these false claims?'” (OC: … these false claims?) 0:24

President Donald Trump (who originated the term MAGA, or “Make America Great Again” during his campaign for president) weighed in on the scandal on Twitter, writing: “[email protected] – what about MAGA and the tens of millions of people you insulted with your racist and dangerous comments!? #MAGA.”

‘Dune’ Opens at $40.1M
Jussie Smollett Trial Set For November
Transgender Employees At Netflix Plan To Walkout Later This Month In Protest Of Dave Chappelle Stand Up Special
Twitter Wonders What Happened to Tom Cruise as He Pops Up at Game With Newish Face
Kim Kardashian Takes Pot Shots at Herself, Family, Sex Tape on ‘SNL’
‘No Time To Die’ Opens to $56M at B.O.