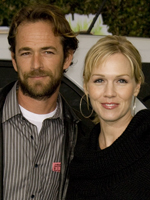 As expected Luke Perry’s official cause of death was an ischemic cerebrovascular accident, or stroke, according to his death certificate, which was obtained by TMZ.

The certificate also revealed that Perry’s body was transported to Dickson, Tennessee, where he was buried on Monday. He owned property there and had a farm.

The 52-year-old Riverdale star suffered a massive stroke at his home in L.A. on February 27th, and never regained consciousness after being rushed to the hospital. He died on March 4th.

Perry shared two children, Jack and Sophie, with his ex-wfie Minnie Sharp. He was engaged to Wendy Madison Bauer, and the pair had sent out save the date wedding cards for an August 17th ceremony.