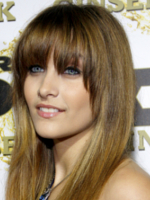 Days after slamming the ‘bloids over reports that she attempted suicide, Paris Jackson is lashing out at the paparazzi who she says make her life hell.

“*Parks at gas station waiting for my boyfriend to pump gas* *closes eyes to listen to favorite song* paps take pic and zoom in so you can’t see that i’m parked and accuse me of falling asleep at the wheel,” Jackson tweeted.

She continued: “When will this stop? This past week it’s been nonstop bulls—t. I'm so sick of it.”

On Monday night, Paris also appeared at Netflix’s The Dirt premiere with her boyfriend, the musician Gabrel Glenn. She looked stylish and relaxed.

All of the attention—and the rumored suicide attempt, and subsequent reports that loved ones are trying to get her into therapy—comes on the heels of HBO’s searing documentary about her late father Michael Jackson. In it, two men say Jackson abused them when they were children.

Several family members have come out objecting to the film and Paris is among them, but she has also said that it simply isn’t her “role” to defend his legacy anymore.