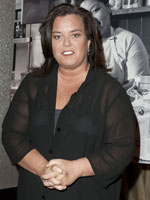 In a new book, Rosie O’Donnell is claiming that her father sexually abused her as a child. The book, titled Ladies Who Punch: The Explosive Inside Story of The View, tells her side of the story about The View, but also gets into great detail about her personal life.

The 56-year-old discussed the allegations with Variety’s Ramin Setoodah: “It started very young. And then when my mother died, it sort of ended in a weird way, because then he was with these five children to take care of. On the whole, it’s not something I like to talk about. Of course, it changes everyone. Any child who is put in that position, especially by someone in the family, you feel completely powerless and stuck, because the person you would tell is the person doing it.”

She has alluded to issues with her father in the past, but she never got into details. “He had his own issues and demons,” she told Piers Morgan in 2012, adding, “You get to be 50 years old, you can’t still be angry at what your father did in 1970 … I have forgiven him.”