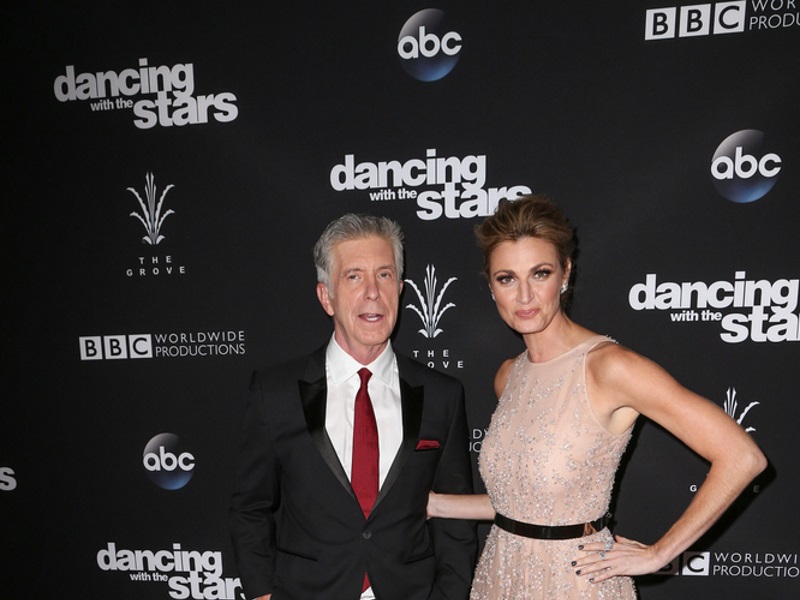 PRPhotos.com
Posted on September 17, 2019 by Pulse of Radio

Spicer’s casting in the new season of DWTS prompted some pushback – including from one of the show’s hosts, Tom Bergeron. Spicer resigned from his post as White House press secretary in 2017 and his casting was met with a fierce backlash on social media. Bergeron, who has hosted the show since its inception in 2005, tweeted that he previously told producers he hoped that after a yearlong hiatus, the return of Dancing with the Stars would be a “joyful respite from our exhausting political climate and free of divisive bookings from any party affiliations.” “Subsequently, (and rather obviously), a decision was made to, as we often say in Hollywood, ‘go in a different direction,'” Bergeron wrote.

“I thought it was finally time to enjoy myself,” Spicer explained in his intro package, while recalling his time working for President Donald Trump. Though Spicer wasn’t employed by Trump for long, the pair stayed on good enough terms for the president to tweet his congratulations on DWTS. “It’s nice to have the leader of the free world on your side,” Spicer said.

As for his partner, it was clear Lindsay Arnold had mixed feelings about being paired with Spicer. “I’m looking forward to forming my own opinion,” she said after meeting him. “His dance ability is at a pre-pre-school level. He’s definitely not a natural at it.”

In other drama – Christie Brinkley had to leave the show after breaking her arm during rehearsals. While the model, 65, had been practicing for three weeks with partner Val Chmerkovskiy, daughter Sailor Brinkley-Cook, stepped in with three days to rehearse the foxtrot to “Uptown Girl,” the song that Christie called her “theme song.” Christie starred in Billy Joel’s music video in 1983. The two married two years later, but split in 1994.

But there was even more drama. Wendy Williams thinks the 65-year-old supermodel faked the whole thing just to get her daughter on the show.”Well, that looked fake as hell,” Williams said of the footage Good Morning America obtained of Brinkley’s fall. In the clip, the supermodel appears to trip over her partner’s foot during a turn, sending her tumbling to the ground. “Let me tell you what I see. I don’t see a wrist and a shoulder being fractured. But that was real cute,” Williams continued. “Here’s my thought: Dancing with the Stars called Christie Brinkley … and she said yes. After she got off the phone, that’s when she plotted her schedule. … In my opinion, I think what Christie did was she signed up for Dancing with the Stars knowing that she’d put her daughter Sailor in there.”

Brinkley denied Williams’ theory in an interview with People. “I’m totally shocked, because I have been there for Wendy Williams. That is so weird,” she said, bursting into tears. “I have to give her a call … I’m really stunned.” BBC Studios and ABC said in a statement that Brinkley “suffered injuries which required surgery to her wrist and arm.” Now, onto the actual dancing.

The highest scoring pair was also the last to dance: James Van Der Beek and Emma Slater knocked their tango – set to Imagine Dragons’ “Whatever It Takes” – out of the park. The pair earned 7s across the board for a total of 21 out of 30 and securing the top spot on the leaderboard. “We have a leading man in the house!” said Judge Carrie Ann Inaba. “James, oh James. So strong, so passionate. So charismatic, but what I love is that you were totally in character and in control, all the way through,” said Judge Bruno Tonioli.

The Bachelorette’s Hannah Brown and her partner, Alan Bersten, kicked the show off on the right foot with a cha-cha set to “I Wanna Dance with Somebody (Who Loves Me)” by Whitney Houston. The dance earned them 7s from Carrie Ann and Judge Len Goodman, and a 6 from Bruno, for a total of 20 out of 30.

In third place after week one is country singer Lauren Alaina and her partner, Gleb Savchenko. Their cha-cha set to Shania Twain’s “Man! I Feel Like a Woman!” earned them a 7 from Inaba and 6s from Goodman and Tonioli, for a total of 19 out of 30.

Bringing up the tail end of the scoreboard are Sean Spicer – who earned a 12 out of 30 for his Salsa with partner Lindsay Arnold – and in last place is Lamar Odom, with partner Peta Murgatroyd. Their Foxtrot only earned them 11 out of 30, with Odom receiving 3s from Goodman and Tonioli, which are some of the lowest scores in the history of the show.

This season marks the first major voting overhaul in the show’s scoring system in years. First of all, there were no eliminations in the first week – nor was there any viewer voting. For week one, only the judges’ scores matter. Then, during the second week, both weeks’ judges scores will be combined and then added to live voting, which is another new aspect to the system. Viewer voting will be limited to live votes that are cast during the East Coast broadcast time frame. Meaning if you’re watching on the West Coast, you are allowed to vote between 5 p.m. and 7p.m., but you’ll be essentially voting on the previous week’s dances because you won’t have seen the dances everyone on the East Coast is voting on.

Wanda Sykes Roasts Scott Baio for Slamming Biden and Defending Barr
Scott Disick Parties With Kardashian Crew After Rumored Split From Sofia Richie
Colin Kaepernick Reacts To George Floyd’s Murder: ‘We Have The Right To Fight Back!’
As Mary-Kate Olsen Moves Out, Olivier Sarkozy Moves Ex In
Lori Loughlin and Mossimo Giannulli To Learn Fate in August
George Floyd’s Family Wants Cops Involved In His Death To Be Charged With Murder