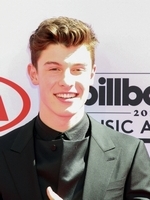 Shawn Mendes dominated the Juno Awards this weekend, taking home trophies for five of the six categories he was nominated in, including for Best Artist, Album, Pop Album and Songwriter of the Year.

Mendes, who was not on hand last night at the Junos as he is on the European leg of a world tour, appeared via a taped performance of his hit single “In My Blood.”

A nationwide live telecast on Sunday night was hosted by Sarah McLachlan, who wasted no time in her opening monologue in taking shots at the leader of Canada’s “neighbor to south,” Donald Trump:

“You know when you live somewhere peaceful and beautiful, then you get a crazy neighbor, and they start causing all sorts of trouble like putting up weird walls, picking fights with all the other neighbors, and telling your daughters how they should behave, all the while saying they’re making the area great again, and you just watch, feeling helpless, and hope they’ll be gone by 2020.”

Also appearing Sunday was The Police lead singer Sting, who introduced David Foster, the top pop music producer, as he was awarded the 2019 Junos humanitarian award.

The Best Country Album award went to Brett Kissel for We Were That Song, while the R&B/soul recording of the year was nabbed by Jesse Reyez. Post Malone won for Best International Album for Beerbongs & Bentleys.

The Weeknd Returns To #1 On Billboard Artist 100 Chart
H.E.R. Tops 2022 NAACP Image Awards Nominations
Betty White’s Assistant Shares One Of The Last Photos Taken Of Her
Scream Tops Spider-Man: No Way Home At The Weekend Box Office
Melanie Lynskey Says She Was Body-Shamed On The Set Of Yellowjackets
Machine Gun Kelly Pops The Question To Megan Fox