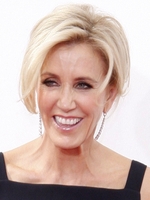 Celebrities are having wildly different reactions to the news of Felicity Huffman and Lori Loughlin’s alleged involvement in a high-profile college admissions bribery case. (They are among 50+ people who allegedly paid up to $6 million to get their kids into elite universities, such as Yale, University of Southern California and Georgetown).

David Mamet, who worked with Huffman when she starred in his Speed the Plow play in the late 1980s, defended the star. He called her actions to “a parent’s zeal for her children’s future,” dubbing the college admissions process “an unfortunate and corrupt joke.”

He continued, “Unqualified (students) may be accepted for many reasons, among them, as Legacies, and on account of large donations made by their parents. I do not see the difference between getting a kid into school by bribing the Building Committee, and by bribing someone else. But, apparently, the second is against the Law. So be it.”

She was accused of paying $15K to a fake charitable organization in exchange for helping her eldest daughter cheat on her college entrance exam, according to evidence, including phone recordings with a cooperating witness. Her husband William H. Macy was not charged. (He celebrated his 69th birthday Wednesday).

Kyle Richards, 50, also sympathized with her friend Loughlin. On What Happens Live With Andy Cohen After Show on Tuesday, she said: “They’re really great people, and you kind of just go, ‘I’m really so confused by all of this. Everyone’s talking about it, but until today, we had never heard this ever existed. Maybe I’m naïve, I didn’t even know that existed.”

Not everyone was as sympathetic. James Van Der Beek, Bethenny Frankel and Lena Dunham were among the celebs who reacted with both shock and horror at the allegations on Twitter.

Meanwhile, Loughlin surrendered to authorities in L.A. Wednesday after touching down from Canada, where she was working.

She and her husband Mossimo Giannulli, allegedly paid $500K to have their daughters, Isabella, 20, and Olivia, 19, be falsely deemed recruits for the University of Southern California’s crew team. Giannulli, who appeared in court Tuesday, raised $1 million for his bond.