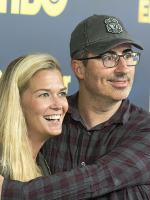 John Oliver makes his living, at least in part, by poking fun at other people. So when he tackled the subject of public shaming with Monica Lewinsky on Sunday’s Last Week Tonight, it would have been tough to predict how the story—and the response to the story—would go.

In the segment, he essentially publicly shamed himself and fellow late night host Jay Leno for going after Lewinsky, who was publicly lacerated after her affair with then-President Bill Clinton became pregnant.

He slammed Leno’s recent Today show appearance, in which he expressed concern over the nature of late night shows in the age of President Trump.

“Everything now is, if people don’t like your politics…everyone has to know your politics,” Leno said. “But when people see you are one-sided, it just makes it tough. I’d just like to see a bit of civility come back to it, you know?”

Oliver questioned Leno’s “civility,” by pointing to old clips of Leno saying the humid stickiness in L.A. was “stickier than Monica Lewinsky.”

Then he showed Leno reading from a fake Dr. Seuss inspired book about the scandal titled “The Slut in the Hat.”

Oliver summarized, “And, if that’s what Leno means by civility, may I offer my new book: ‘Oh the Places You Can Go F— Yourself, Jay Leno!'”

“Look, my hands are not clean here, either,” he said. “I wasn’t in the U.S. at the time, but ten years after the fact, I was in a Daily Show piece marking the tenth anniversary of the scandal above a graphic reading, ‘10 Sucking Years,’ which is gross. It’s gross.”

Lewinsky appeared herself and shared her own perspective as an anti-bullying advocate.

Lewinsky said: “I do think there’s a spectrum of behavior on which we can sort of judge, as a society, ‘Is this where shaming is effective to change social behavior, or is it damaging?’” (0:14 … OC: “is it damaging?”)

Her own experience, she continued, “was a sh–storm. It was an avalanche of pain and humiliation, and, obviously, I could not have gotten through it without my family, and, eventually, when I was allowed to talk to my friends, my friends, too . . . At 24 years old, it was really hard to hold on to a shred of dignity or self-esteem when I was just the butt of so many jokes and being misunderstood.”

“One of the things that happens with these kinds of experiences is that you start to disappear, you start to feel like you don’t matter. And I think that when somebody sees you and just acknowledges your humanity in the smallest way, it really can make a world of a difference,” she told Oliver. And you don’t know — it could help save someone’s life.”

On Twitter Monday, Lewinsky thanked Oliver for his message and for giving her a platform. She tweeted: “v grateful for the words of support on here re @LastWeekTonight. hope these kinds of conversations help anyone suffering know you’re not alone + you can survive it. it will get better.”