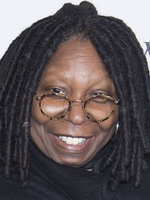 Whoopi Goldberg shocked audience members and her fellow co-hosts when she made a surprise return to The View on Thursday. The appearance was her first after a near-death experience battling double pneumonia and sepsis more than a month ago.

After the audience’s excited cries of “Whoopi!” died down, the 63-year old said: “This is my first foray out. I’m not there yet, I’m not better…but over the next week and a half I will be here more often.”

She told her co-hosts: “I wanted the first foray to be to come see y'all because I really kinda missed y'all.”

Goldberg also said that Joy Behar’s crack that she was on maternity leave really resonated. “I think some people said to me, 'So, um, how did you get pregnant?' And I couldn't figure out what they were talking about, and then I remembered that Joy had said, 'She's on maternity leave.'”

She also got serious though: “You think you can push through because you got a little cold, you say, 'I'm just gonna keep going, keep going.' And you think because you've healed quickly before that something crazy can't happen. Well, it can. I had double pneumonia and sepsis… and so they had to pump a lot of stuff out of me. This is a cautionary tale for all of us. You must really take care of yourself because there is little tiny stuff out there that will kill you that you never think of.”