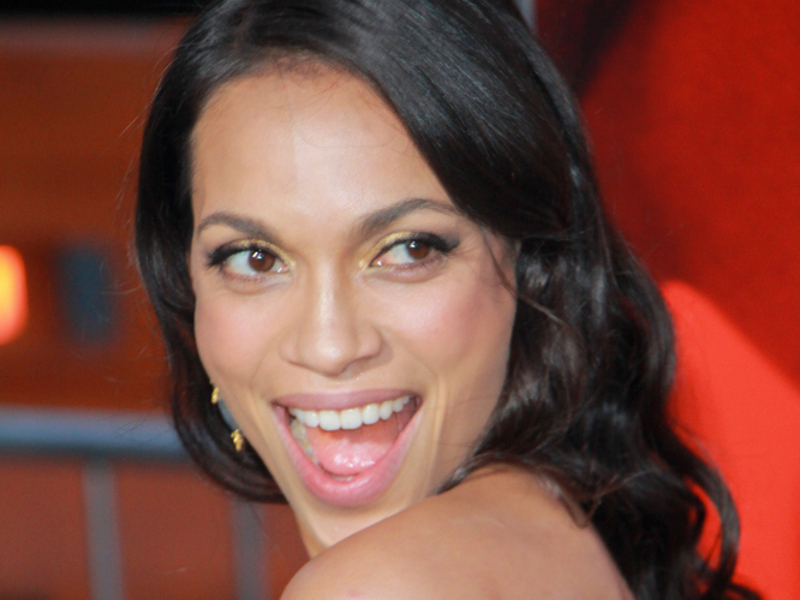 ROSARIO DAWSON MOVES IN WITH CORY BOOKER: Rosario Dawson and Senator Cory Booker are moving in together. The 41-year-old star and her 51-year-old politician boyfriend have been separated by the pandemic. She told Kevin Smith at the Jay and Silent Bob Reboot Pop-Up in L.A.: “I haven’t seen him since February. He is by himself, going between Newark and DC. I’m actually in the process of moving, by the way. I’m going to New Jersey. I’m moving to Newark. It's time. We were thinking about moving in together anyway, but especially during all of this, it’s been really intense." The pair have been dating since 2018.

JULIANNE HOUGH IS FREAKING OUT: Julianne Hough is having a hard time following her split from Brooks Laich, a source tells Us Weekly. “Julianne’s not doing great right now and feels like her brunette hair is a reflection of her feelings,” the insider explains. “She is super upset.” The Dancing With the Stars contestant shared her darker locks on social media, which followed a brief flirtation with pink hear.

BRYCE DALLAS HOWARD IS SORRY: Bryce Dallas Howard says she wouldn’t sign on for The Help if offered the project again. The 39-year-old told The Los Angeles Times that the renewed popularity of the 2011 Oscar winner amid Black Lives Matter protests is misplaced. The drama has been criticized for its retelling of African American struggles through a white lens. Of looking back on the film, she says: "[W]hat I will say is: What I’ve seen is that folks have the courage to say that. 'With all due respect, I love this project, I do not think you could be the filmmaker.' That’s a really powerful thing to say. That’s an important stance to take in order to make room for the true authentic storytellers." Howard starred alongside Octavia Spencer, Viola Davis, Jessica Chastain, Allison Janney and others.

CHRISSY TEIGEN CELEBRATES BREAST IMPLANT REMOVAL: Chrissy Teigen’s friends can be real boobs. After she opened up about having her breast implants removed last week, her pals surprised her with a cake … comprised of a tombstone and icing breasts. Meghan Mackenzie and Luke Dillon were the thoughtful duo behind the cake. She shared snaps on Instagram Story.

RAVEN-SYMONE MARRIE MIRANDA PERMAN-MADAY: Raven-Symone, 34, married Miranda Pearman-Maday, she revealed on social media. "I got married to a woman who understands me from trigger to joy, from breakfast to midnight snack, from stage to home," Symone captioned a sweet shot of them.