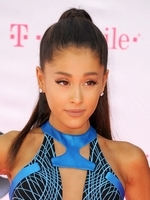 Ariana Grande and her friend and collaborator Victoria Monet are planning to release a brand new track on Monday. Ariana first tweeted the idea, initially saying she wanted to release the song as early as Thursday.

“man, let’s drop it tomorrow night @VictoriaMonet seven rings is ab to be number one for eight weeks and the album might go back to no. 1 too….” she wrote. “we need to celebrate tbh ! life too short and too sweet rn. hmmmmmmm.”

But Ariana and Victoria soon determined the song would have to drop on Monday because it was “not mastered or ready” yet.

Ariana and Victoria performed an unreleased track called “She Got Her Own” during Ariana’s Washington, D.C. show earlier this week, but the one being released Monday is apparently titled “Monopoly.”