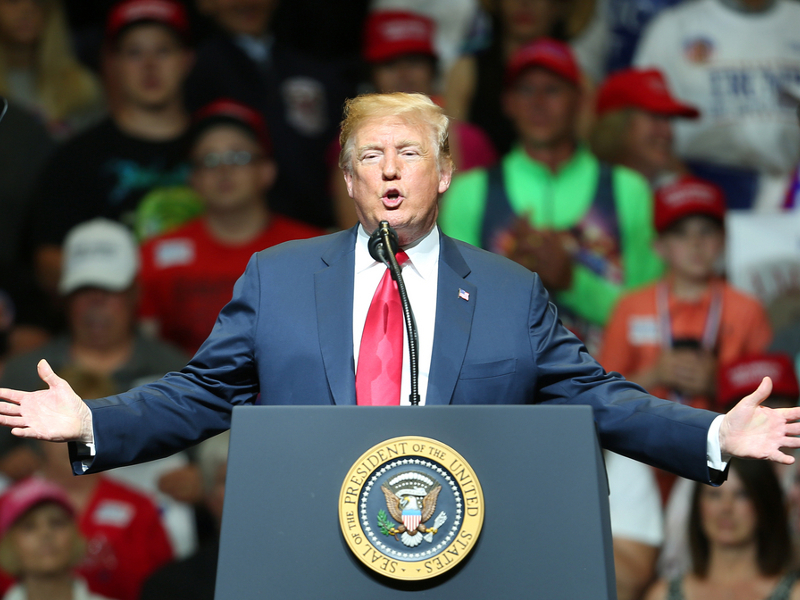 DONALD TRUMP CALLS BLACK LIVES MATTER MURAL A 'SYMBOL OF HATE': Donald Trump took to Twitter to blast New York city Mayor Bill deBlasio for his decision to paint a Black Lives Matter mural outside of Trump Tower on Fifth Avenue in Manhattan. He wrote, “NYC is cutting Police $‘s by ONE BILLION DOLLARS, and yet the Mayor is going to paint a big, expensive, yellow Black Lives Matter sign on Fifth Avenue, denigrating this luxury Avenue.” He continued, “This will further antagonize New York’s finest who LOVE New York & vividly remember the horrible BLM chant, 'Pigs In A Blanket, Fry ‘Em Like Bacon'. Maybe our GREAT Police, who have been neutralized and scorned by a mayor who hates and disrespects them, won’t let this symbol of hate be affixed to New York’s greatest street. Spend this money fighting crime instead!” deBlasio responded, “Here’s what you don’t understand: Black people BUILT 5th Ave and so much of this nation. Your 'luxury' came from THEIR labor, for which they have never been justly compensated. We are honoring them. The fact that you see it as denigrating your street is the definition of racism.”

SOLDIER TIED TO MISSING FORT HOOD PRIVATE VANESSA GUILLEN CASE COMMITS SUICIDE: Yesterday (July 2nd), a suspect in the case of missing Fort Hood soldier Vanessa Guillen fatally shot himself in front of police as they approached him. According to ABC 13, human remains that are possibly linked to Guillen, were found two months after her disappearance. Guillen had claimed she was being sexually assaulted on base. Then on Wednesday, as officers approached the suspect after he fled Fort Hood, the unidentified junior soldier pulled out a gun and shot himself. He died form the wound. A second civilian suspect was arrested this week and is currently waiting to be charged. The civilian is the estranged wife of a former Fort Hood soldier. In a press conference, Guillen's family revealed that they had been demanding answers since her disapearance. Her sister Mayra said, “They lied to us since day one. When I first went up to that base, that subject, I met him, not knowing that he had something to do with it. I felt… something was telling me that he did something. And I wasn’t wrong.” She added, “He still had the nerve that same day to laugh in my face. And apparently now he kills himself. Why I don’t know. But whoever is responsible has to pay.” Guillen's other sister Lupe added, “How can this happen at a military base? How can this happen while she was on duty? how can this just happen and they let it go under the rug, like it was nothing? They think sexual harassment, sexual assault, that’s a joke! My sister is no joke.”