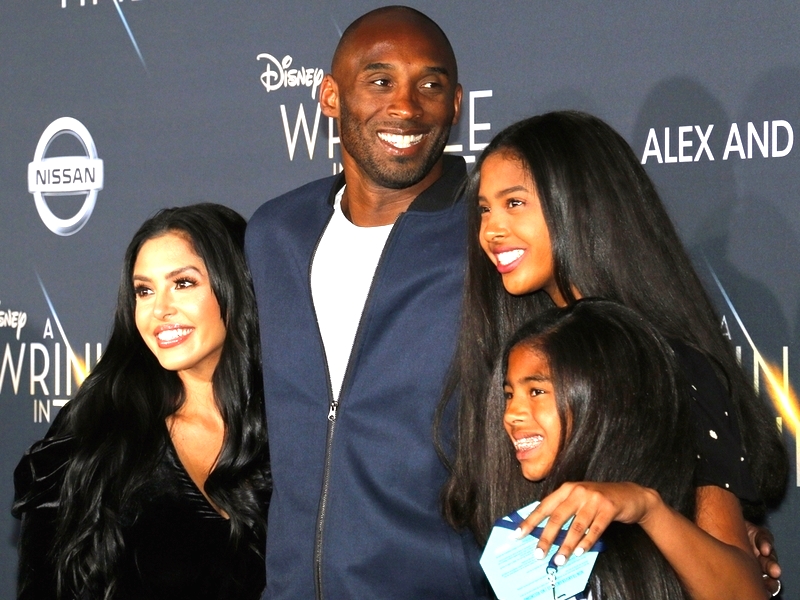 VANESSA BRYANT OPENS UP ABOUT GRIEF: Vanessa Bryant took to social media to open up about grief. She wrote via Instagram, “Let me be real—Grief is a messed up cluster of emotions. One day you’re in the moment laughing and the next day you don’t feel like being alive.” She continued, “I want to say this for people struggling with grief and heartbreaking loss. Find your reason to live. I know it’s hard. I look at my daughters and I try to push through that feeling for them. Death is guaranteed but living the rest of the day isn’t. Find your reason.” Meanwhile, in another post, Bryant asked the media to refrain from showing footage related to Kobe and Gianna's fatal crash. She wrote, “We ask that you do not air photos of the wreckage, helicopter in the air or accident scene. We do NOT want to see it. Our year has been traumatic enough. You have thousands of photos and videos you can show besides footage of 1/26/2020.”

KAMALA HARRIS CONFESSES THAT SHE GOOGLED HER HUSBAND BEFORE THEIR FIRST DATE: Vice President-elect Kamala Harris revealed that she googled her now husband Doug Emhoff before they met on a blind date in 2013. The couple appeared on CBS News' Sunday Morning, Kamala said, “So, yes, my best friend set us up on a blind date. And she said, ‘Just trust me. Just trust me.’ You know, she wanted me to just kind of go into it, and she said, ‘Don’t Google him.’ But I did!” Doug responded, “Oh. This is a reveal!”

SKAI JACKSON ALLEGEDLY DATED SOLANGE'S SON JULEZ SMITH: Reports say that 18-year-old Disney star Skai Jackson was dating 16-year-old Julez Smith, Solange Knowles' son. According to The Jasmine Brand, in an alleged leaked group chat, Julez revealed that he dated Skai and they had sex but he broke up with her because she cheated. In one alleged screenshot, he wrote, “I fu**ed her good and got her addicted and then left her. It’s complicated.” An old photo and alleged footage of Julez and Skai also hit social media this weekend.

CLUBHOUSE USERS ACCUSE TIFFANY HADDISH OF CYBERBULLYING: Tiffany Haddish has been accused of cyber bullying after she is said to have called out a Black doctor on Clubhouse. According to Clubhouse users, on Wednesday (January 13th), Haddish, influencer Chakabars, Joe Budden and more were discussing COVID-19 and the government's involvement with the virus. During the discussion, Tiffany called out the Black female doctor for spreading misinformation. Twitter users reported that as a result, the doctor actually tried to take her own life.

SPIKE LEE REGRETS WORKING CHADWICK BOSEMAN SO HARD DURING 'DA 5 BLOODS' FILMING: Spike Lee says that he feels terrible for working Chadwick Boseman so hard while they were filming Da 5 Bloods — while he was secretly battling colon cancer. Spike Lee told The Hollywood Reporter, “There was a very small circle that knew he was not going to be here that much longer, and I understand why he did not want people to know. If I would have known, the first battle sequence in the film is 100 degrees and we had the shots where he has to run 50 yards like (Olympic runner) Usain Bolt.” He continued, “He has to haul it. If he tells me that (he was sick), automatically I’m not going to make him, I’m not going to push him as hard as I can. He did not want any shortcuts, any special treatment…”

TYLER PERRY TO BE RECOGNIZED DURING 2021 ACADEMY AWARDS: Tyler Perry is set to be honored at the 2021 Academy Awards. According to Page Six, Perry will receive the 2021 Jean Hersholt Humanitarian Award for his philanthropic and charitable work. Academy President David Rubin said in a statement to Variety, “Tyler’s cultural influence extends far beyond his work as a filmmaker. He has quietly and steadily focused on humanitarian and social justice causes from the beginning of his career, caring for people who are most often ignored.” Perry will share the honor with the Motion Picture Television Fund. Past recipients include Angelina Jolie, Oprah Winfrey, Quincy Jones, Elizabeth Taylor, Audrey Hepburn and Frank Sinatra.

JORDYN WOODS BREAKS SILENCE AFTER BOYFRIEND KARL ANTHONY TOWNS TESTS POSITIVE FOR COVID-19: Jordyn Woods has broken her silence after boyfriend NBA star Karl Anthony Towns tests positive for COVID-19. She wrote, “Praying for you babe. I know you’re going to pull through. God’s got you and so does your most powerful guardian Angel up there…you’re one of the strongest people I know.” Towns lost his mom to COVID-19 last year.