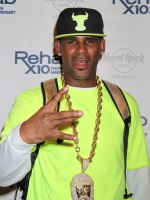 R. Kelly is back in police custody due to unpaid child support. The singer appeared in court yesterday (March 6th) and was taken into custody after failing to pay more than $161,000 in back child support.  Sophia Ansari, a spokeswoman for the sheriff's office said, “He’s in our custody."

In other news, the singer is facing more accusations. According to CBS 2, R. Kelly is being accused of having sex with a girl when she was 13-years-old and actually gave her herpes.

The vicrtim — who is now 30, has claimed that she first had sex with the singer at a hotel in Detroit on Dec. 30th, 2001 and then at the singer’s recording studio in Detroit a few weeks later.

Over the next four years, the woman said she visited Kelly at his Atlanta home, which is where he allegedly gave her the sexually transmitted virus.

The woman no longer lives in Michigan, but detectives reportedly plan to fly her in for an interview.

Detroit Police Chief James Craig told the outlet, “We are eagerly waiting to speak to the alleged victim."