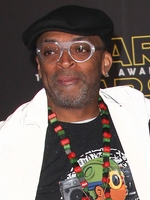 PRPhotos.com
Posted on March 8, 2019 by Pulse of Radio

She’s Gotta Have It is back for a second season. According to Complex, Spike Lee has announced the release date for his Netflix series reboot. The show will return on May 24th for a nine episode season. DeWanda Wise, who plays the lead role of Nola Darling, took to social media to announce the news of the series’ return. She said, “Fire up your BBQ’s #NolaDarling returns Memorial Day Weekend: May 24th only on @netflix.”