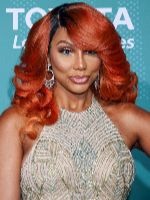 Tamar Braxton's estranged husband Vince Herbert is having some serious financial issues. According to The Blast, the music exec is being sued for twice — one for allegedly writing bad checks and the other for eviction.

According to court docs, Herbert is being sued by a company called NK Real Estate investments. The suit has claimed that Herbert entered into a one year lease over a Los Angeles condo back in December.  Herbert was supposed to pay $37,000 a month but allegedly did not pay in February. He was served last month with a three-day notice to pay rent or quit.

The company sued Herbert for the unpaid rent of $38,850, plus other costs.

The second lawsuit was filed against Herbert by a woman named Dakota Sal accusing him of writing her two checks totaling $10,000 last month. She says both bounced and the account is now closed.

Why George Clooney Turned Down $35M for Day of Work
Jussie Smollett’s Defense Team Argues That One Of The Osundairo Brothers Is A Disgruntled Ex Lover
Michael J. Fox Doesn’t Think There Will Be A Cure For Parkinsons In His Lifetime
Tracee Ellis Ross Sued By Former Presonal Assistant
Trey Songz Investigated For Sexual Assault
Matthew McConaughey Will Not Run For Governor Of Texas