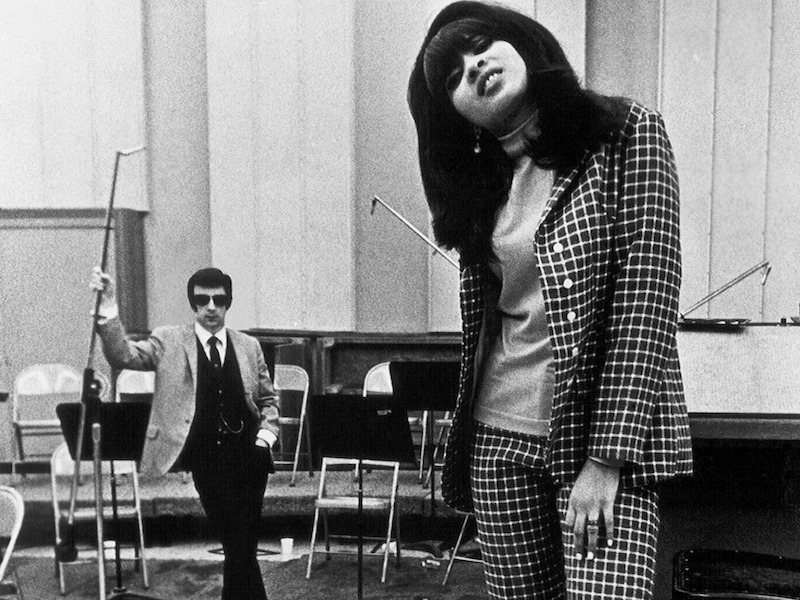 Getty Images
Posted on January 13, 2022 by Pulse of Radio

Ronettes lead singer Ronnie Spector died on January 12th at age 78 following a brief battle with cancer, according to The Los Angeles Times. A statement from her family was issued, which read: “Ronnie lived her life with a twinkle in her eye, a spunky attitude, a wicked sense of humor and a smile on her face. She was filled with love and gratitude.” She is survived her husband, Jonathan Greenfield, and two sons, Jason and Austin. In the 1970's she was forced by ex-husband Phil Spector to surrender custody of their adopted twins Louis and Gary.

Brian Wilson saluted Spector, who sang his all-time favorite song, “Be My Baby”: “I just heard the news about Ronnie Spector and I don’t know what to say. I loved her voice so much and she was a very special person and a dear friend. This just breaks my heart. Ronnie’s music and spirit will live forever.”

Producer and former boyfriend Steve Van Zandt posted: “RIP Ronnie Spector. It was an honor to Produce her and encourage her to get back on stage where she remained for the next 45 years. Her record with the E Street Band helped sustain us at a very precarious time (thanks to Steve Popovich). Condolences to her husband and family.”

Ronnie, who was borne Veronica Bennett in New York City formed the Ronettes with older sister Estelle and cousin Nedra Talley in 1959. Ronnie eventually married the group's Svengali producer, the infamous Phil Spector, and remains best known for Spector's legendary “Wall Of Sound” productions — “Be My Baby,” “Walking In The Rain,” “Baby, I Love You,” “(The Best Part Of) Breakin' Up,” among many others. The Ronettes were inducted into the Rock and Roll Hall of Fame in 2007. Estelle Bennett died in 2009.

Phil and Ronnie Spector were married in 1968 and divorced in 1974. She shed light on their often violent and unhappy union in her 1990 memoir, Be My Baby: How I Survived Mascara, Miniskirts And Madness. For years afterwards, she was barred from singing her Ronettes hits and collecting royalties due to Phil Spector's crippling lawsuits.

In the early-1970's she was briefly signed to the Beatles' Apple Records where in 1971 she recorded the unsuccessful George Harrison-written single “Try Some Buy Some,” which was co-produced by Harrison and Spector. In 1977, Steve Van Zandt produced a comeback hit for Ronnie with a cover of Billy Joel's “Say Goodbye To Hollywood” with backing from the E Street Band. She appeared on Eddie Money's 1986 Top Five hit “Take Me Home Tonight” where she reprised the chorus of her 1963 classic “Be My Baby.”

In 2006, Ronnie Spector released Last Of The Rock Stars, her first album in 20 years, which featured former paramour Keith Richards, Patti Smith, and the Raconteurs, among others. Her final album was 2016's English Heart, which included covers of such British Invasion legends the Rolling Stones, Gerry & The Pacemakers, the Kinks, the Zombies, the Beatles, the Animals, the Bee Gees, the Dave Clark Five, and others.

Spector told us that part of the Ronettes' allure in the 1960's was that they were so different from other girl acts: “I didn't realize it then, I just wanted to be different. And we were different, y'know, look-wise and all that anyway. So it was just, I think when the audience saw us, they saw something very different, and very sexy, and they loved my voice (laughs).”

She also said that Phil had taken such complete control over her personal and professional life that she sometimes didn't even know what record label she was signed to: “I was so young and I knew so little. Y'know and then I was 3,000 miles away from home. I was so young that I didn't know that he had me on Apple Records, A&M (Records), I never got a dime. When I came back to New York, I had nothing. No money, nothing.”

Ronnie Spector told us she had nothing but appreciation for “Take Me Home Tonight” and the exposure it garnered both on MTV, radio, and television: “It was great, y'know, the Eddie Money song that got me back as far as the public was concerned. And I would do shows with Eddie and then, we would do TV shows, too. But, y'know, because I couldn't sing my hits, I had to sing, sort of in the background. I still love the song.”

Back in 2007, Keith Richards inducted the Ronettes into the Rock and Roll Hall of Fame and admitted he was an unabashed fan: ” I realized, despite Jack Nitzsche's beautiful arrangements, that they could sing all their way right through a wall of sound. They didn't need anything. They touched my heart right there and then and they touch it still.”

That night, Ronnie Spector thanked her fans for staying with her: “To all my fans, thanks for remembering. It's been a looooong journey getting here, but now that I am here, let's rock!”

RNR HALL OF FAME Ronnie Spector Thanks Her Fans :

RNR HALL OF FAME Keith Richards Says The Ronettes Could Sing Through A Wall Of Sound :

Ronnie Spector On ‘Take Me Home Tonight’ With Eddie Money :

Ronnie Spector On The Allure Of The Ronettes :

Fred Savage Accusers Detail The Allegations That Led To Him Being Fired From ‘The Wonder Years’ Reboot
People Were Kicked Out Of Beyonce’s ‘Renaissance’ Party For Breaking The Rules
Motown Legend Lamont Dozier Dead At 81
Olivia Newton-John Dies At 73
Ryan Fellows, Neve Campbell, The Kardashians + More!
‘Bullet Train’ Arrives At Domestic Box Office In No. 1 Spot